Back in November, too early for holiday gifts, a package arrived containing a book: Unsheltered by Barbara Kingsolver. No note included. I thought my mom — a Kingsolver fan — may have ordered it, but no. Was it sent by mistake? Nope. My husband uncovered the mystery. “My colleague sent it. He read Boy on Hold and it reminded him of this book by Kingsolver.”

Stop. the. press. Caught in a moment of greatness, I was speechless. One of my very favorite authors, Kingsolver is a genius at tackling big world issues in an articulate and moving way. Back as a student teacher, I taught Poisonwood Bible — allowing me to study the imperialism of Republic of Congo, while dissecting each conflict and character down to the nub, leaving me scraped raw and vulnerable and brimming with emotions I didn’t realize I had. That book remains one of my favorite books of all time.

To be considered alongside Barbara Kingsolver in any capacity is a huge honor. I mean, *my book* reminded him of one by the great and brilliant BARBARA KINGSOLVER?!?

How it got into the hands of my husband’s colleague is a compliment in itself. Turns out, BOH was recommended to said colleague’s daughter — a psychology student at NYU — by her professor. (Let me say that again.) An NYU psychology professor recommended Boy on Hold to one of his/her students. *pinch me* So, BOH made its rounds in the family, which led to the Kingsolver gift…

Such an overwhelming compliment, it was a bit intimidating to read Unsheltered. But of course, I did. And it certainly held up.

The book’s logline sets the tone and could very well apply to Marcella Trout in BOH: How could two hardworking people do everything right in life, a woman asks, and end up destitute?

Alternating time periods between current day and post-Civil War era, Kingsolver layers climate change and environmental issues of today with the evolution controversy of Charles Darwin. Kingsolver’s smart prose certainly made me think. I’m grateful for the introduction to Mary Treat, the 19C biologist “whose work deserves to be better known.” Kingsolver deftly wove in strange but true events such as Treat’s feeding her own fingertip to her Venus flytrap as an experiment. As the story turns more serious, though, it made me appreciate those who take a stand on a large or small scale — even if it comes at great cost with no reward. It also made me rethink the value of “stuff” in general, as also eloquently put in this article my friend pointed out to me today.

All in all, the message rings clear: Rather than fight change and for a life we think we deserve, find creative ways to adapt and be open to happiness that waits for you there.

An Unsheltered excerpt that’s stayed with me:

…when God slams the door on you…you’re going to end up in rubble…you won’t find your way out of the mess if you keep picking up bricks and stuffing them in your pockets. What you have to do is look for blue sky.

A message Marcella Trout should absolutely consider as her world turns upside down and she finds herself “in the rubble” at the end of BOH.

I want to hear from you:
Have you ever had to adapt to a new normal? How did you find blue sky?

When I started writing Catcher’s Keeper, my oldest was five. He was so little, it never occurred to me that he would ever read it someday. But recently, at age 14, he did. And he loved it. 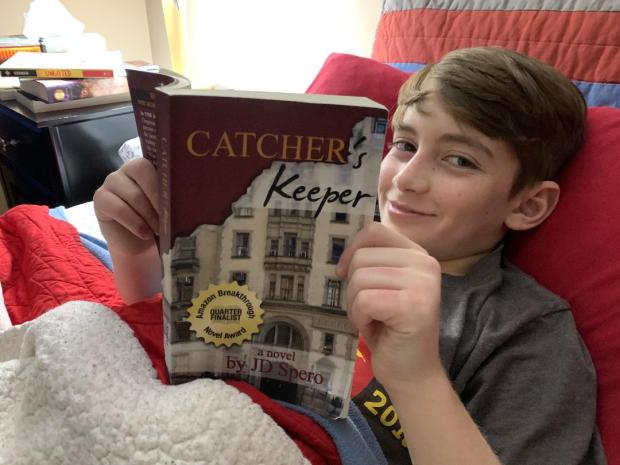 Inspired by The Catcher in the Rye, I originally wrote CK for adults — though it’s often paired with Rye in high schools as a YA book (fun fact: Salinger originally wrote Rye for adults too). I may have cleaned CK up a bit if I’d known kids (especially my kids) were going to read it.

I mean, its prose has a toilet mouth. Take the first line:

Not even a week since I moved in with my brother and he’s testing my pacifist nature, butting in on my shit.

And that’s just the first line. (The word ass appears another paragraph down…)

It’s an odd feeling. My son peeled back a layer and saw another side of his mom. One that writes in male voices and curses like a truck driver. Yikes. To say I was relieved that he liked it is an understatement.

Though it was published in 2014, the book has gotten a boost recently. Still a favorite for book clubs, it also resides in several classrooms as a Rye companion. There’s been a slight uptick in sales, which is nice. In November, it was featured on this cool website, Snowflakes in a Blizzard, which highlights and brings awareness to some awesome, lesser-known books.

I’m proud of my first book. But even prouder when I read this from my first born:

I’ve read Catcher in the Rye and I thought it was great. The voice, the conflicts, the hidden messages. But, when I read Catcher’s Keeper, it shed a whole new light on everything. The characters were all so believable as adults, you’d think it was written by JD Salinger himself! That signature Holden Caulfield (now Alden) voice is ever-present, but you experience and feel everyone else in a whole new way. The struggles, the twists, that suspicious MD, and an unforgettable ending makes this book a must-read for anyone who’s read Cather in the Rye. 5 stars. 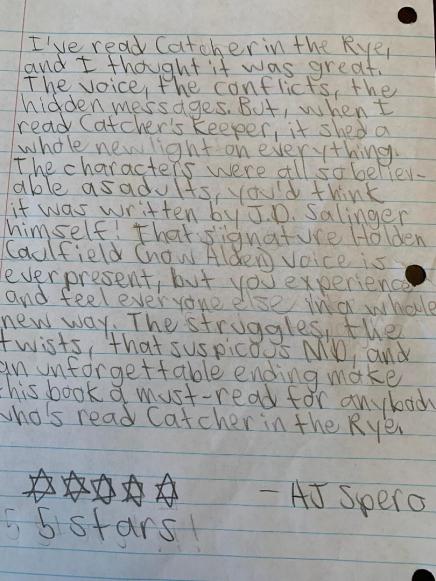 My youngest son just finished a unit on polar bears in art class. His teacher just posted this beauty to Artsonia.

I love this artwork for so many reasons.

Some of you may be surprised to learn polar bears inspired the concept of Concerto.

For those of you who are familiar with Forte, you’re probably wondering how the sequel could have anything to do with these beautiful arctic creatures. Forte is about music and magic . . . an ancient rivalry and a mysterious prophecy to fulfill. No lions or tigers or bears of any kind.

Its follow up, Concerto, is also about music and magic — but also about extreme weather personified by power-hungry gods of the sea and skies.

Sure, my latest may not involve animals, but it does involve their habitat.

Years ago I watched a documentary about polar bears that made me cry. With their habitat melting away, the problem seems insurmountable. And that’s just one example. Climate change. Global warming. Beyond these buzz words in the political arena, when I think about the kind of environmental problems we are passing on to the next generation, my mama-tiger claws come out. But then, despair hits. What can I, a writer, possibly do?

But this book is not a political statement. As the book evolved, the magic created an otherworldly twist that doesn’t translate to what’s happening in our environment. Sami, my main character, is charged with fighting extreme “natural” disasters and the evil force behind it. However, considering all the crazy extreme weather happening in the world lately, it seems timely. Wouldn’t it be cool if music could magically affect the weather?

I’m not hoping my book will trigger an environmental miracle. I do hope that it helps raise awareness, though. I also hope my son’s precious artwork is not someday seen as a study of a glorious animal that had become tragically extinct.