Recently, I was invited into a classroom to speak about Author’s Choice. They’d been studying the different elements in a novel that require clear decisions by the author, such as setting, character names, structure, voice, etc. Though I’ve taught these things in my own classroom, analyzing classic novels and other texts in the curriculum, this was the first time I thought about my choices as an author. And it gave me pause. It made me think about all the choices I make as I write, consciously or subconsciously, to build a story that people will want to read. See, that last part is key. Your ultimate goal as a novelist, really, is for people to want to read your stuff. That said, the choices an author makes are informed by that goal. 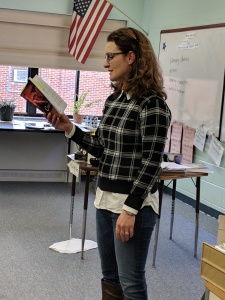 Reading from Concerto on the topic of climate change

Here were some talking points for my classroom visit:

Authors get asked a lot how they choose the names of their characters. I’ve been known to respond, “Whatever’s easy to type!” Truth told, I go with my gut. Some names come easily and some have fits and starts before being finalized. But here’s the Sophie story: A friend of mine wrote a book in which a secondary character (named Sophie) was killed off toward the end. It had to be done for the story, which is usually fine. However, since she wrote the book, she was haunted by her choice. She met several people with the same name—lovely people. New friends, new colleagues, children, pets, and the list goes on… It’s worth noting, though, that she was haunted not because she killed off a character, but because she named her Sophie.

The third book in the Forte series is told by a minor character’s POV, and tells her story. As the first two books, this is also written in first person (which feels more YA to me than third person). But I was so concerned that the voice be different, I opted for an edgy tone I thought might be cool. Turns out, a hundred pages in, the edgy voice I was hoping for sounded downright bitchy. I thought, “No one is going to want to read anything this bitch has to say!” So, I threw out the 100 pages (and the next 100) until something clicked. What clicked? The backstory. I wrote a backstory for the character that no one will ever see but made me feel sympathy for her, which in turn will make readers feel sympathy for her. Here’s hoping!

I have a Nevus spilus. (genre)

As I embarked on writing a book that included magic, it needed to be relevant to me. Many authors don’t have this problem and can build make-believe worlds with nothing but their imaginations. I don’t have that kind of confidence. I feel like people wouldn’t buy it. For that reason, a lot of my magic stems from Greek mythology, which I taught for years and feel well-versed in. Also, my main character’s magic is triggered by her birthmark on her hand, a constellation of freckles in a condensed circular pattern. When I was little, people sometimes thought the Nevus spilus on my hand was dirt. Now that I’m older, some people think it’s a severe case of “age spots.” Ho-hum. I’d rather think it’s magical.

Have you seen the viral video of that washed up dead whale *full* of plastic? It had ingested so many plastic bags that were floating in the ocean, its stomach was literally full of them. And how ’bout them polar bears? With their habitat melting away, the problem seems insurmountable.

Climate change. Global warming. Beyond these buzz words in the political arena, when I think about the kind of environmental problems we are passing on to the next generation, my mama-tiger claws come out. But then, despair hits. What can I, a writer, possibly do?

Write a book that’s an allegory for battling climate change. The result? Concerto, book 2 of the Forte series.

This pretty much sums it all up, doesn’t it? When I taught high school English, one of my students interrupted our lesson on literary devices to say, “I don’t think authors mean to write that way, with all the metaphors and similes and stuff. I think it’s just the English teachers who find stuff in books so they can make us learn it.” Hmmm. I have to say, I didn’t like what she said. It rumpled my feathers, for sure. But now that I’m a published author, I know for a fact that word choice and  use of literary devices are absolutely intentional. Why? We need to find a creative way to say something without being cliché or simply listing what’s happening. Making the readers feel what the characters feel. Putting the reader inside the story. That’s what will make people want to read your book. And be touched by it. And recommend it to all their friends.

And that, at the end of the day, is what we writers really want. Isn’t it?